Home » Other » Everything about pitbulls
Other

Pitbull, a dog that we often associate with aggression, bites and fighting. In reality, this animal is quite different from the clichés that run on him. Then we discover the character and all the essential things to know to take care of a Pitbull.

The term PitBull refers to the American Pit Bull terrier, a breed that in reality is recognized as such only by the British federation UKC (United Kennel Club) and by the ADBA (American Dog Breeders Association) which above all have different standards. In Italy, on the other hand, the FCI (International Cynological Federation) and the ENCI (National Cinofilia Italiana Body) have not included the Pit Bull among the list of races.

The current PitBull would seem to be a cross between the Old English Terrier and the Old Bulldog, two English breeds. It is believed that the “ancestors” of the Pit Bull in the 1800s were used in Europe as working dogs, but then these dogs were trained to fight, a pastime that the English of the time liked very much. The term “pit” in English means its arena, that is the place where these bloody shows were held, which we, unfortunately, do not yet have finished, continuing illegally all over the world.

It is precisely from here that the perception of these dogs has completely changed and has been wrongly associated with a presumed danger of the animal itself.

Between the 1980s and the 1990s, specific legislation was drafted in the United States prohibiting families from raising Pit Bulls because of their “inherently aggressive and dangerous nature”. During this period, public officials even passed to pick up the dogs that were in the families, even though they had never given any sign of danger. For a while also in Italy, the Pitbulls have been included in the list of dangerous breeds for humans.

For years now, so many Pitbull owners and people have been fighting to erase this sort of mark affixed to a dog whose responsibility is only that of having trusted (and continues to do so) with a man.

2.Pitbull, characteristics of the dog

Pitbull is a medium-sized dog, powerful, with compact musculature and very proud, agile and fast bearing. Its structure is a bit square, the head is wedge-shaped, and the well-developed jaw resting on a powerful neck stands out in the face. The eyes are round, and the ears are not usually very long, but unfortunately, they are often cut. The coat can be of different colours but always very compact, rough and short-haired.

Recapitulating some features of the Pitbull are:

3.The character of the Pitbull

As we have already said, the fact that the Pitbull is aggressive is a commonplace absolutely undeniable. Dogs of this breed bred in emotionally stable and affectionate environments have the opportunity to develop their real sweet and loving character, just like that of other dogs. If the Pitbull is instead found to have to live in a violent environment, he will surely be more inclined to repeat what he has seen thus developing a certain aggressiveness (this obviously is valid also for other breeds of dogs).

When we hear about Pitbulls attacking people, most of the time their behaviour is attributable to potential aggression often encouraged by the owner himself who perhaps, using the dog as a guard, trained him to act in this way ( then maybe the situation got out of hand!).

The PitBull is actually a brave dog, loyal to the owner who, if well behaved as a puppy, in an environment suitable for him and following his needs, also lends itself to be a family dog, perfect for children. To the detriment of his fame, there are even those who use it for dog therapy, for example, to help people with autism (this happens mainly in the United States).

Finally, it is a dog that holds up physical and mental stress very well, very intelligent but a bit stubborn.

Summing up the Pitbull is: 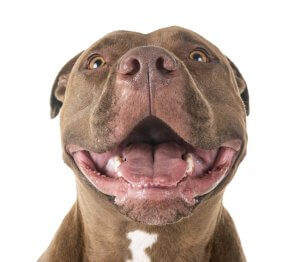 The Pitbull is not a dog subject to particular diseases and, given its physical presence, generally enjoys excellent health. However, it is advisable to subject it to all routine checks and prophylaxis against ticks or fleas. It also needs preventive care for Cardio-Pulmonary Filariasis.

5.Pitbull, how you treat it

The Pitbull is a dog that may not be suitable for those struggling with the first animal experience. It is, in fact, a dog that must be educated from an early age, that needs someone who can dedicate some free time to let him go out, run and play outdoors. It is a very muscular and powerful dog that needs to be able to release its energy and not always be closed in four internal walls.

Given its strong physique, it does not need great care except for a balanced diet that is always better to establish with your trusted veterinarian in order to avoid nutritional deficiencies in this animal or on the contrary to make it too fat. The Pitbulls kept at home, in fact, tend to exceed with food and therefore to increase in weight, exposing themselves more to some diseases.

Since it is a short-haired dog, it can be brushed from time to time. The Pitbull needs to spend time with the owner who is very fond of, so it is better to avoid taking an animal like this if you do not have the chance to devote the right attention to it.

6. Pitbull, how to adopt one 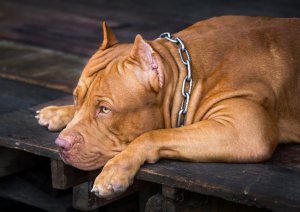 Even if your dream is to have a Pitbull, we advise you not to buy it, but to adopt it. It is often mistakenly believed that it is not possible to adopt a purebred dog. In reality, this is not the case, given that there are several reasons why people abandon these and other dogs.

Fortunately, there are generic “Rescue centers” or explicitly dedicated to a breed that collect the remaining dogs and look for a new family. In the case of the Pitbull, for example, we point out the Facebook group Pitbull & Amstaff where it is possible to adopt dogs of this breed or crossbreeds.

7.Pitbull, the opinion of the veterinary

We asked a veterinarian, to give us some useful information to take care of a Pitbull. Here’s what he told us:

“When you hear about Pitbull it is not uncommon for a direct ‘dangerous dog’ mental connection, a bit for the news stories that very often occurred and that sees them as protagonists, a little (and above all) for the resulting media action. But are they really “killer” dogs as they have been labelled by now? The Pitbull is a very intelligent dog, sometimes stubborn and competitive, but it is also very sociable with the man, sensitive and patient towards children; it has a remarkable resistance both physical and psychological, and also, for this reason, it is also used in pet-therapy (and if it were not a reasonably balanced dog how could this use be possible?). Its strong character is due to years of selection and the use that was made of it: it was used as a fighting dog”.

Can anyone take care of a Pitbull?

“The crucial point is always the same: how much a person can manage a certain type of dog. It is essential when deciding to adopt an animal to inquire about its characteristics and needs, especially for some breeds, as in the case of the Pitbull; it is essential to know how to educate your dog in the best possible way, always respecting its nature. In the case of this breed, it is necessary to have a pulse and begin since they are puppies, not to instigate them to competition and aggression (even only with phrases of the type “Attacca attacca” or the pull of the rope, even for pure-play).

Socialization is also crucial since they are small, with people but also with conspecifics. Dogs of this genus are, unfortunately, often kept as guard dogs, so it is natural that they mature a certain mistrust towards strangers or are always on the “who goes there”. The aggressiveness that can manifest is due to the work that he was taught to perform, that of defending his territory. It must be stressed over and over again that it is not an aggressive dog in itself, the danger lies only in the hands of those who adopt it; too often, unfortunately, they are chosen and trained to be aggressive.

They are no more biting than many other dogs, a Yorkshire could be even more so, but of course, it is the bite damage that is greatest, only for its larger physical size and strength. They are therefore reliable animals, but certainly not suitable for everyone (and this certainly also for the good of the dog itself). They are consequently dogs that adapt well to the family, as we have previously said, they do not represent any danger even for children, on the contrary. They often suffer (pull from the tail, ears, up and down from the rump) without emitting a single bark, but it is. However, your constant presence is mandatory, and of course, it is essential to educate children to respect the animal “.

What does a Pitbull need?

“It is a dog that loves being in close contact with its owner, but this does not always mean between the four internal walls: it needs to move, to play, to go out in the open air. It does not require special care, except the basic ones valid for all breeds (vaccination, prevention against fleas and ticks, gastrointestinal parasites and heartworm disease); the diet must be balanced, and the daily dose of food must be divided into at least two meals (morning and evening). It is a dog that tends to gain weight, so it is not necessary to exceed the doses, and at the same time, it is crucial to make room for physical activity “.

We remind you as always that a dog is not a toy and needs care and attention. This is even more true in the case of the Pitbull that needs the affection of its owner, long rides and walks in the open air and someone attentive to his diet.
Related Articles
We will be happy to hear your thoughts