Sheba Review: About the Brand

Sheba is a well-known brand produced by Mars Petcare US, a subsidiary of Mars Incorporated. The brand had been pulled out of the market in January 2011, due to economic circumstances, but was reinstated in July 2012. As it made its return, it abandoned the plastic tray packaging and came only in pull-tab cans. However, mid-way through 2014, it began featuring the plastic trays once again in its “Perfect Portion” line.

This move was directed at addressing the challenge of evenly separating the two servings contained in the cans. Thus the Perfect Portion line is slightly more expensive than the canned products. Other than Sheba cat food, other well-known brands produced by Mars Petcare include Whiskas for cats, Pedigree for dogs and Cesar Canine Cuisine. The company headquarters are in Franklin, TN and has over 15 manufacturing facilities spread all over the US.

Overall, the brand is very popular in the cat food industry. This is evident in the many positive reviews of the brand on Sheba’s official site and other unbiased sites. It is currently divided into three primary production lines: Perfect Portions Premium Pates, Premium Cuts in Gravy and Premium Pates in Natural Juice, but it also features an assortment of different product in it’s Variety Packs.

The brand has no records of food recalls on the FDA (Food and Drug Administration) database or online. All of its products have garnered parallel reviews so none of them stands out notably. Below is an overview of three products from the three main production lines. 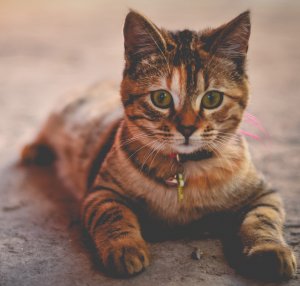 The manufacturers claim this entree lacks none of the nutrients needed for a cat’s wholesome well being. The ingredients in this product bring immense health benefits to cats at all life-stages, as they meet all the nutritional requirement of the AAFCO Cat Food Nutrient Profiles.

Key ingredients include beef, beef liver, meat broth, chicken, poultry by-products and meat by-products. Among the nutrients list of the food are; minerals such as iron sulfate, potassium chloride, potassium iodide and calcium carbonate; vitamins such as B1, B6, D3, and E; folic acid and salt. Here’s a breakdown of its first 5 ingredients:

Check Sheba Premium Grain-Free Pate on Chewy
Being a great source of animal protein and a number of other essential nutrients, beef is a high-grade ingredient. However, since a greater part of this ingredient is made up of moisture, much of it evaporates when fully cooked. The percentage of protein ultimately supplied by the ingredient is therefore minimal, but it still counts toward the great nutritional value present in this product.

It is a well-known fact that insubstantial qualities, liver intake can prove toxic to cats. But cat owner need not be wary of this ingredient, as only a moderate quantity –enough to cater for the cat’s nutritional needs– is contained in the product.

Meat Broth: Although it is not as nutritionally beneficial as water – it’s alternative, the flavor imbued in its moisture makes it the better option. Unfortunately, the source of the meat is undisclosed, and our guesses are only as good as anybody else’s.

This ingredient is obtained from clean, grounded parts of poultry carcasses including bones and beakers. They usually do not contain the meaty poultry parts. But such parts are generally a delight for cats and are also rich in animal protein.

Meat byproducts: This one is of the low-quality ranks. It is made from slaughtered or dead animal parts including kidneys, lungs and brains. The legal status of the practice of recycling parts from dead animals has raised heated debates, but most cat foods producers really don’t mind any such disapproval of the act. 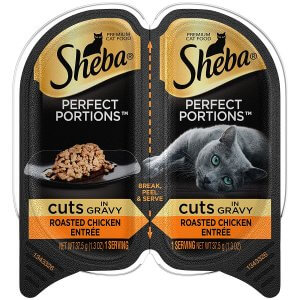 Key ingredients include chicken (livers and broth), whitefish and tuna. The overall nutritional value of this product commands the loyalties of its buyers. But it also has some drawbacks, such as a relatively high carbohydrate content, which is higher than a cat’s nutritional need.

It also has a number of featured artificial substances such as food binders. Here’s a breakdown of the first 5 ingredients:

This product’s features key ingredients that are highly rich in protein. The following list includes an overview of the key 5 ingredients:

All in all, there is no doubt about the impressive nutritional value presented in Sheba foods. They’re are free of artificial preservatives, although added color and food binders are regularly featured to the objection of some. But their complete preclusion of grains and corns from their ingredients list has gotten nods from many-a-buyer.

The shady character of their meat by-products has been overlooked by most, though some cat-owners who’s cats have special health needs may completely avoid any products with such ingredients. If you’re one of those then your budget for cat food should aim for the products on the high-end of the scale.

Overall, is Sheba a good choice? Sheba cat food isn’t flawless, but it’s one of the best budget brands on the market. Sheba foods are free of artificial flavors and preservatives and, unlike some foods that rely exclusively on meat by-products, contain a mix of by-products and clearly-specified muscle meats.

Is Sheba cat food being discontinued?

Sheba (cat food) Sheba is a brand of canned cat food produced by Mars, Incorporated. In January 2011, Mars Petcare US announced that Sheba would be discontinued and thus will no longer be available for purchase in the United States. … In mid-2014, Sheba once again returned to plastic trays with its Perfect Portions line.

How much Sheba cat food should I feed my cat?

Is Sheba or Fancy Feast better?

On average, Fancy Feast wet cat food recipes contain 10.05% more protein than Sheba recipes. Clearly, there is a significant difference between the protein content of Sheba and Fancy Feast.

Please check the ingredients of individual products to find out the details about taurine.

Does Sheba cat food need to be refrigerated?

Check out health supplements for Your Pet!!