Dogs belonging to the American Pitbull Terrier breed are one of the races that at the moment raise more controversy and media attention, also because there are many clichés and false myths about this breed.

Below we show you the ten false myths about Pitbull, explaining why these beliefs exist and why they are unfounded. Thanks to this AnimalPedia article, you can find out more about Pitbulls, their character and some physical characteristics.

1. All Pitbulls are aggressive and dangerous

Despite the bad reputation of these dogs, it is not true that all Pitbulls are aggressive and dangerous. On the contrary, most of them are animals that do not create problems, and that does not endanger anyone’s life. However, this does not mean that all American Pitbull Terriers are friendly because much of the dog’s character depends on the type of education received.

Aggression and danger change from dog to dog; they are not specific features of a breed. Everything depends on genetics, on how the socialization process took place if the Pitbull was trained, how the owner is cared for, and how the dog is managed.

2. The Pitbull’s jaw is blocked when it bites

A false myth is common but absurd. No anatomical or physiological mechanism in the Pitbull blocks its jaw. The bite of a Pitbull is the same as that of other dogs.

This false myth circulates not only about the Pitbulls but also to many other breeds of dogs. It is also said that the Boxers, the American Staffordshire Terriers and other races have jaws that get stuck when they bite, but it is not a belief that corresponds to reality.

3. The Pitbull’s brain grows too much 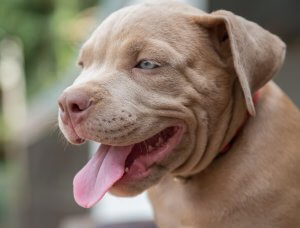 It is said that the Pitbull’s brain develops more than the skull allows, which is why dogs go crazy and become aggressive. This claim is false for both the Pitbulls and other breeds of dogs.

The false belief was initially born in relation to the Dobermans. Instead, it is not true neither for the Dobermann nor for the Pitbull. If the claim were valid, the dog would die.

One of the most common false myths is that the Pitbull bites so strongly that it exceeds 1600 psi (English acronym for pounds per square inch), which in the international metric system equals 112.49 kilos-force per square centimetre.

Measuring the pressure exerted by an animal’s bite, apart from humans, is very difficult because it is impossible to count on the voluntary and conscious cooperation of the subjects studied and the data obtained are not precise. However, measures have been taken that give an idea of ​​the power of the bite of dogs and other animals.

National Geographic has studied the bite of several species, including dogs. Although these are not studies of high scientific rigour, they provide data that, at least, help to establish and dispel the myth of the strength of the Pitbull bite.

According to their research, on average, a dog’s bite pressure reaches 320 psi, and Pitbull is not the most successful dog breed. Furthermore, the bite pressure of animals such as lions, hyenas and tigers is around 1000 psi.

So, if the Pitbull bite pressure were 1600 psi, it would exceed that of a lion. It would be impossible to train a Pitbull for Schutzhund races or defence because they would destroy the protective sleeves, including the arms of the trainer. It is a false myth widespread but not true. However, it is essential to teach them to bite inhibition of puppies of any breed so that the socialization phase is complete and the dogs learn to interact with people and their peers correctly.

5. The character of the Pitbull is unstable and unpredictable 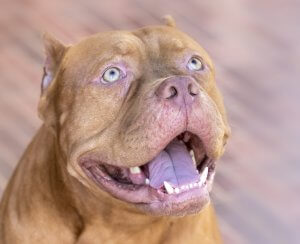 It is also said that the nature of the Pitbull is unpredictable and that it can attack at any moment, both strangers and people it knows, without giving signals that can allow foreseeing an attack. It’s false.

Healthy Pitbull dogs show the same stress symptoms as other dogs. Moreover, their character is stable, and it is extraordinary that they attack without reason. Tests carried out by the American Temperament Test Society show that the character of the Pitbull is even more stable than that of most dog breeds.

6. Since he was a fighting dog, he is an aggressive dog with people

Dogfighting originated in the nineteenth century and was organized in pits in which the owners with dogs subjected to this cruelty were located. At the end of the fight, people had to be able to lift the dog (winner) to get him out of the pit. For this reason, the animals chosen to fight were aggressive animals with other dogs but very sociable with people.

Throughout history, the Pitbulls have been chosen as fighting dogs precisely because they are friendly with people but very often aggressive towards other animals. The same has happened with most Terrier breed dogs and with many hunting dogs. Some Pitbulls behave aggressively towards humans, but this has nothing to do with either history or race. In fact, in the past, Pitbull was used as a babysitter due to its excellent socializing skills.

7. A Pitbull that attacks other animals will be aggressive with people

This statement is false. Dogs can differentiate different animals (including human beings), and if they are aggressive towards a species, it does not necessarily mean that they will be different from another.

Hunting dogs are a perfect example. They can chase and violently attack their prey, but they would never hurt a human being. Something similar happens with German shepherds, capable of killing predators but completely harmless with sheep and humans.

The same goes for the Pitbulls. Some of them have attacked dogs or other animals, but this does not mean that they will be aggressive with people.

8. Pitbulls feel no pain when they fight

Pitbulls feel pain like other dogs. Still, when they perform emotionally intense physical activities, this pain can take second place because different physiological responses are more important for the survival of the organism.

This also happens in dogs of other breeds, able to withstand harrowing situations from the physical point of view thanks to the adrenaline of the moment.

The Pitbulls feel the pain and do not deserve to be used for fights or pastimes that are not fun and even painful for them.

9. All Pitbulls attack other dogs

It is not true that all Pitbulls attack or want to fight with other dogs. Some Pitbulls react when they see other dogs (by the instinct of domination, fear, etc.) and are not able to socialize well with their peers. On the other hand, there are also very friendly Pitbulls with other dogs.

Most of the Pitbulls, from the behavioural point of view, are classified in the middle: they are neither particularly aggressive but neither sociable towards the other dogs. Each Pitbull must be taken as an individual and not as a breed.

10. An aggressive Pitbull cannot be re-educated

Pitbulls that have become aggressive or have been used for combat must undergo a long process of re-education and rehabilitation and not all complete it. However, many Pitbulls can be safely rehabilitated based on a systematic program of socialization and canine training geared to the needs of each, carried out by a professional expert in these behaviours.

Related Articles
We will be happy to hear your thoughts